7 Signs of Narcissism: The Most Dangerous Personality Type

Narcissism is a personality disorder. It is often defined by a person’s inflated sense of self-importance, a need for admiration, and a lack of empathy. Narcissists often have an exaggerated sense of their own abilities and accomplishments and believe that they are superior to others. They can be very charming and manipulative, but ultimately, they are only concerned with themselves. Narcissism is considered to be the most dangerous personality type because it can lead to destructive behavior such as verbal abuse, manipulation, and even violence.

It’s important to understand that narcissism isn’t just someone’s sense of inflated ego. It’s a real personality disorder that can have serious consequences for those around them. If you think that you might be dealing with a narcissist, watch out for these 7 signs.

One of the more harmless signs of narcissism is vanity. A narcissist will often go to great lengths to make sure they look good. They may spend hours getting ready for a date or important event and will always want to be the center of attention.

This tale is one of the more harmless narcissistic personality traits, and it isn’t always a bad thing to consider your appearance. However, if you find that, for example, your partner is only interested in themselves and not in you, it might be a sign that you’re dating a narcissist.

Narcissists have a hard time taking criticism, even when it’s constructive. If you point out something that they’re doing wrong, they’ll likely become defensive and may even lash out at you.

This is one of the more difficult narcissistic personality traits to deal with because it can make it impossible to have a constructive conversation with a narcissist. If you’re constantly walking on eggshells around your partner and afraid to give them any criticism, it might be a sign that you’re in an unhealthy relationship.

Narcissists are often jealous of others and may try to undermine them or belittle their accomplishments. They may also become enraged if they feel like someone is getting more attention than they are.

If your partner is always jealous of your friends or is always trying to one-up you, it might be a sign that they’re a narcissist. This behavior can be destructive to relationships and can make it difficult to maintain healthy friendships or partnerships.

A narcissist will often need constant admiration and will become easily offended if they feel like they’re not getting enough attention. They may try to belittle others in order to make themselves feel better and may get angry if they feel like someone is taking the spotlight away from them.

If you know someone that is always needing reassurance and gets upset when you don’t give them enough attention, it might be a sign that they’re a narcissist. Read more about Chaz Bono’s weight loss.

Ever met people that believe that the world seemingly owes them everything? Well, that’s a narcissist for you. Narcissists often have an exaggerated sense of entitlement and believe they are owed things they haven’t actually earned.

This is one of the more dangerous narcissistic personality traits because it creates an extremely unbalanced, one-sided relationship. If you find yourself always giving and your partner never giving anything back, it might be time to reevaluate the relationship.

Narcissists are often very exploitative and will take advantage of others in order to get what they want. They may use people for their own gain and then discard them when they’re done with them. This leads to the next point.

One of the most toxic narcissistic personality traits is a lack of empathy. Narcissists often are unable to see things from another person’s perspective and may not care about how their actions affect others. This can lead to them taking advantage of people or even manipulating them emotionally.

If you find that your partner is always putting their own needs first and doesn’t seem to understand or care about how their actions affect you, it might be a sign that they’re a massively dangerous narcissist. This behavior can be destructive and can even lead to emotional abuse and worse.

These are just some of the signs that you might be dealing with a narcissist. If you think that you or someone you know might have Narcissistic Personality Disorder, it’s important to try and get them professional help. Narcissists can be extremely dangerous, and their behavior can destroy relationships, families, and even lives. If this is impossible, it’s a good idea to try and remove yourself from the situation as soon as possible. 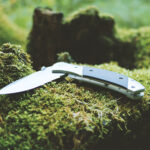 How to Use Folding Pocket Knife Safely